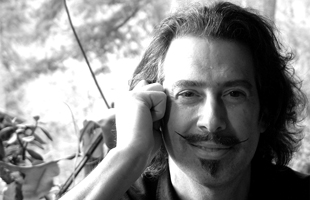 This is my interview with Bruce Zick, a long time collaborating artist with CTN in various forms. Bruce Zick is a busy artist currently working at Pixar.  For more about this artist visit their CTN Profile: CLICK HERE

I’m currently freelancing for Pixar. I was freelancing for Disney back in the Nineties and they recommended me to Pixar for A Bug’s Life. It’s been a wonderful relationship since then. Pixar is always pushing the envelope and each new assignment seems more challenging than the last.

I was always interested in art as a kid, mostly because of my love for comic books.  I had a passing fancy for animation in college, though I didn’t really know what I wanted to do with it.  I remember when the first Art of Walt Disney book came out in the early seventies, I was so fascinated with the pencil drawings that I couldn’t put the book down.  It was many years later when I interviewed for my first animation job at Ruby-Spears and got my way in to the background department.  Back then a beginner like myself started off as an apprentice in the Union, and I was so lucky to be trained by Dave High, one of the most talented guys I've ever met. 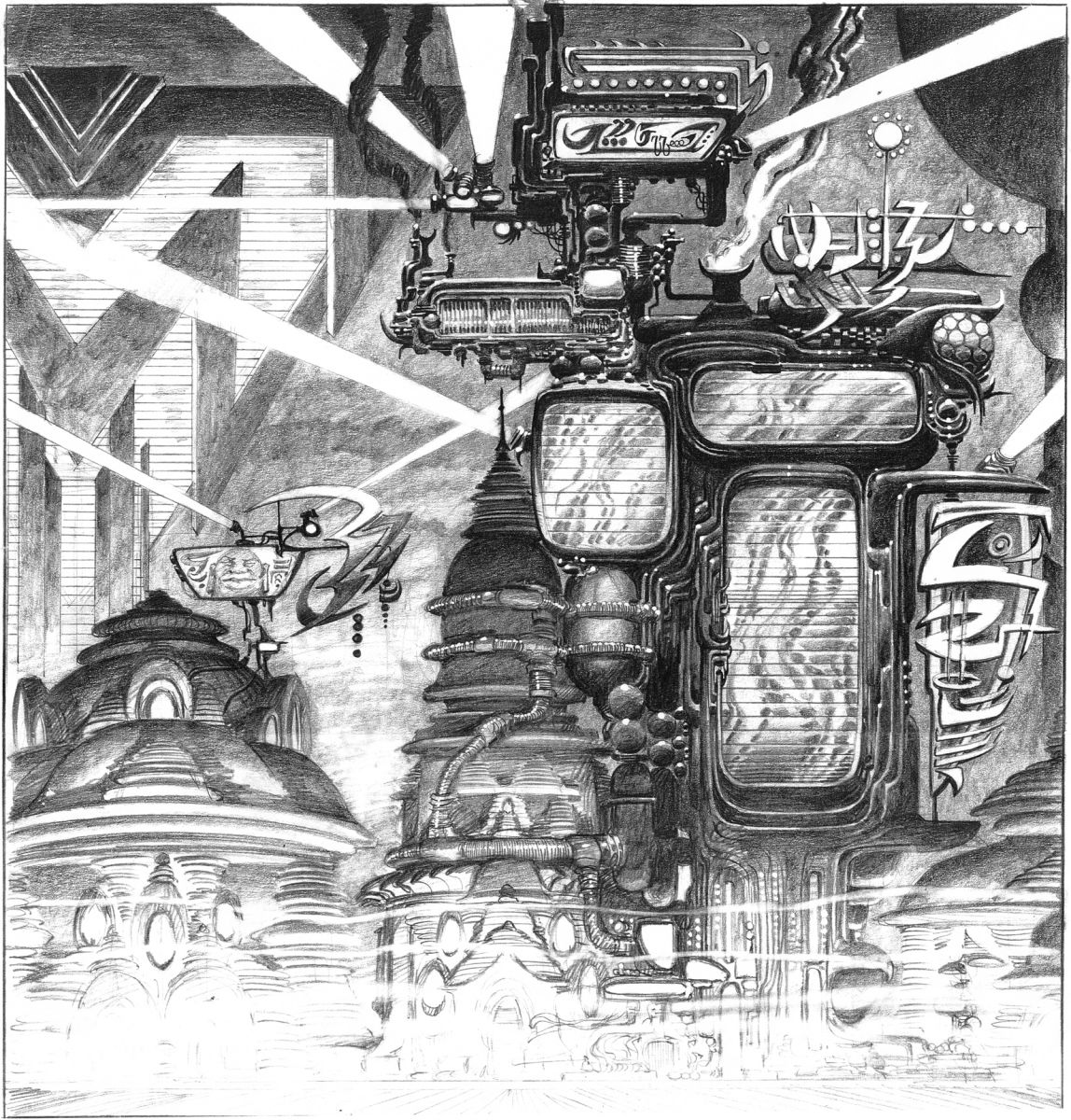 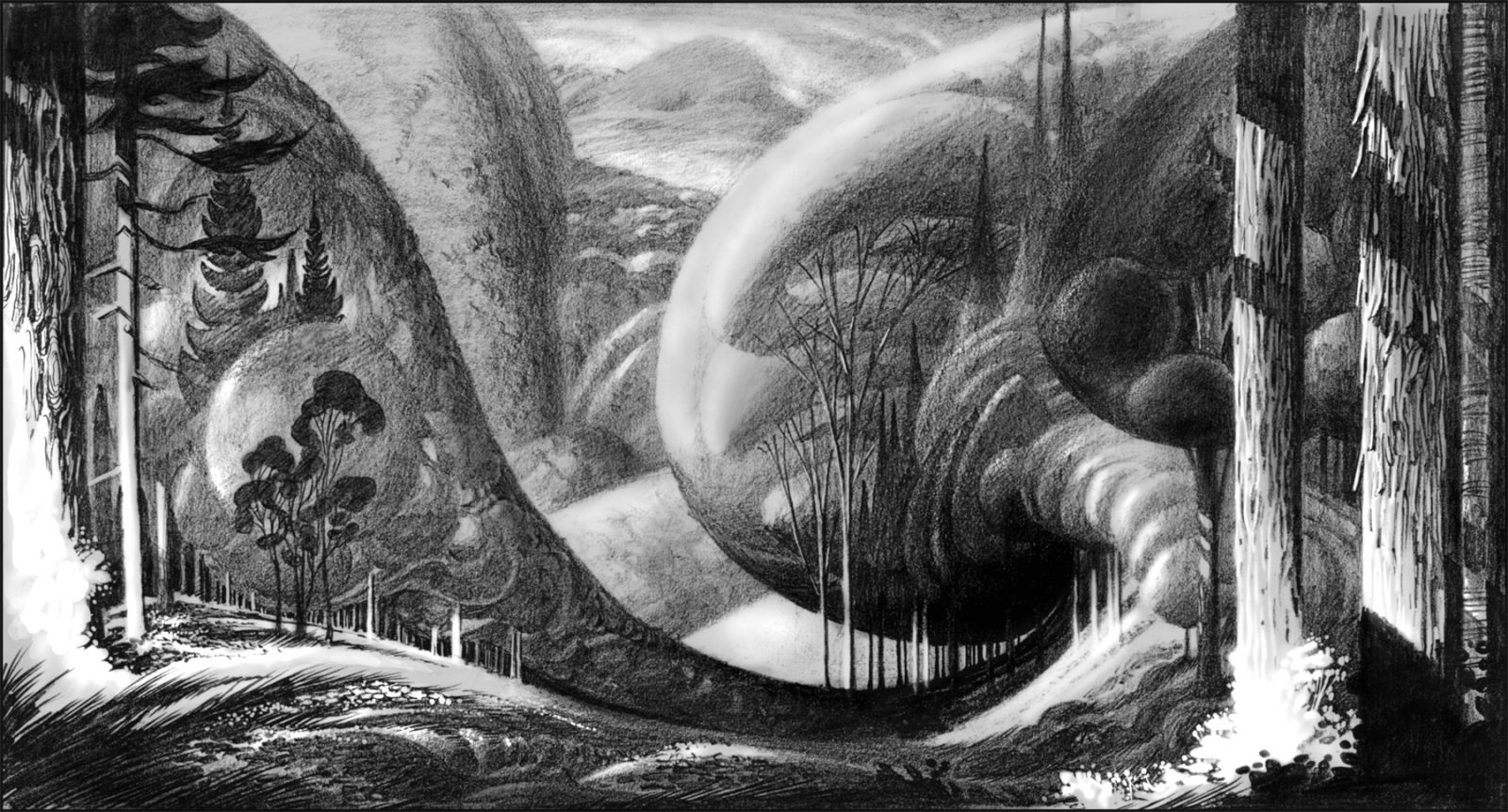 I slowly built up a portfolio over the next five years and started freelancing for other studios.  One of the early highlights was working on He-Man Masters of the Universe at Filmation.  I was crammed into a tiny closet of a room with Dave Dunnet and Lorenzo Martinez, two extraordinary artists.  Every day was a crazy, Dada-esque romp of loud music, jibber jabber, and inspiration.  After a quick stint at Don Bluth’s studio, I went back to freelancing in Saturday morning cartoons.  I joined Richard Raynis’ crew at D.I.C., working on first Kidd Video, and then Ghostbusters.  That group was doing some of the wildest, most amazing designs in the field and it was an honor to work with them.  Later,  I designed the Keebler Cookies commercial, exploring  the inside and outside of the Keebler Tree,  for Mike Lyman at Filmfair Studios.  He later ended up at Disney and called me in as a key background designer for Rescuers Down Under.  From there, I worked on numerous Disney movies, then jumped over the Dreamworks for their first two movies, then jumped to Fox Animation for Titan A.E., which I think is a really underrated movie. 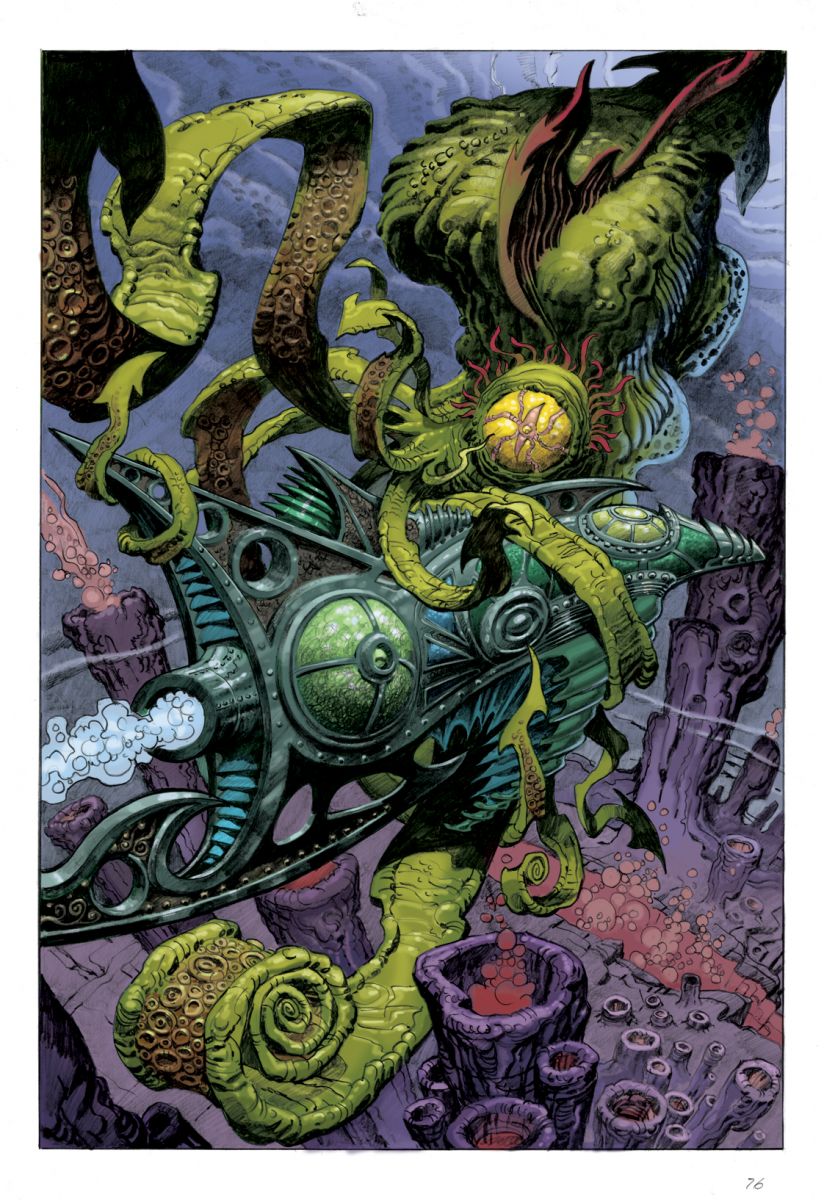 I started off around the age of six being fascinated with Comic Books.  Wayne Boring and Bob Kane, Dick Sprang, Murphy Anderson, and Carmine Infantino really excited me.  It wasn’t until I started reading Jack Kirby books, first at DC Comics, and then at Marvel, that I truly became obsessed with drawing.  I had a very limited awareness of the larger world of art even in my teens.  It wasn’t until much later when I started in the Animation Industry that I became a student of art.  Of course, all Disney artists were fantastic as inspiration, most notably Eyvind Earle.  But slowly, I became more influenced by movie art directors and production designers, like Norman Bell Geddes, Cedric Gibbons, and the great Ken Adams, to name a few.  It finally got to the point where everything was inspiring—art from all times and places—and still is today.  I’m constantly finding new inspirations, like today I rediscovered the sci-fi paperback covers of Richard Powers, which ironically I saw as a kid.  But now he blows me away in an all new way.

How did you get involved with CTN and what have you found it brings to you as an artist?

I think Tina Price contacted me through Facebook years ago and invited me to join and display my work at their website.  Tina has been great all these years; always reaching out, always ready to support some endeavor or another.  Currently, she’s bringing me down to L.A. for the CTNExpo where we will premiere a new set of prints of my personal landscapes.  She’s also working with me to create an art book retrospective of my works.  She has sort of plugged me back into the community that I have been away from for many years after I left California to live up in Portland Oregon. 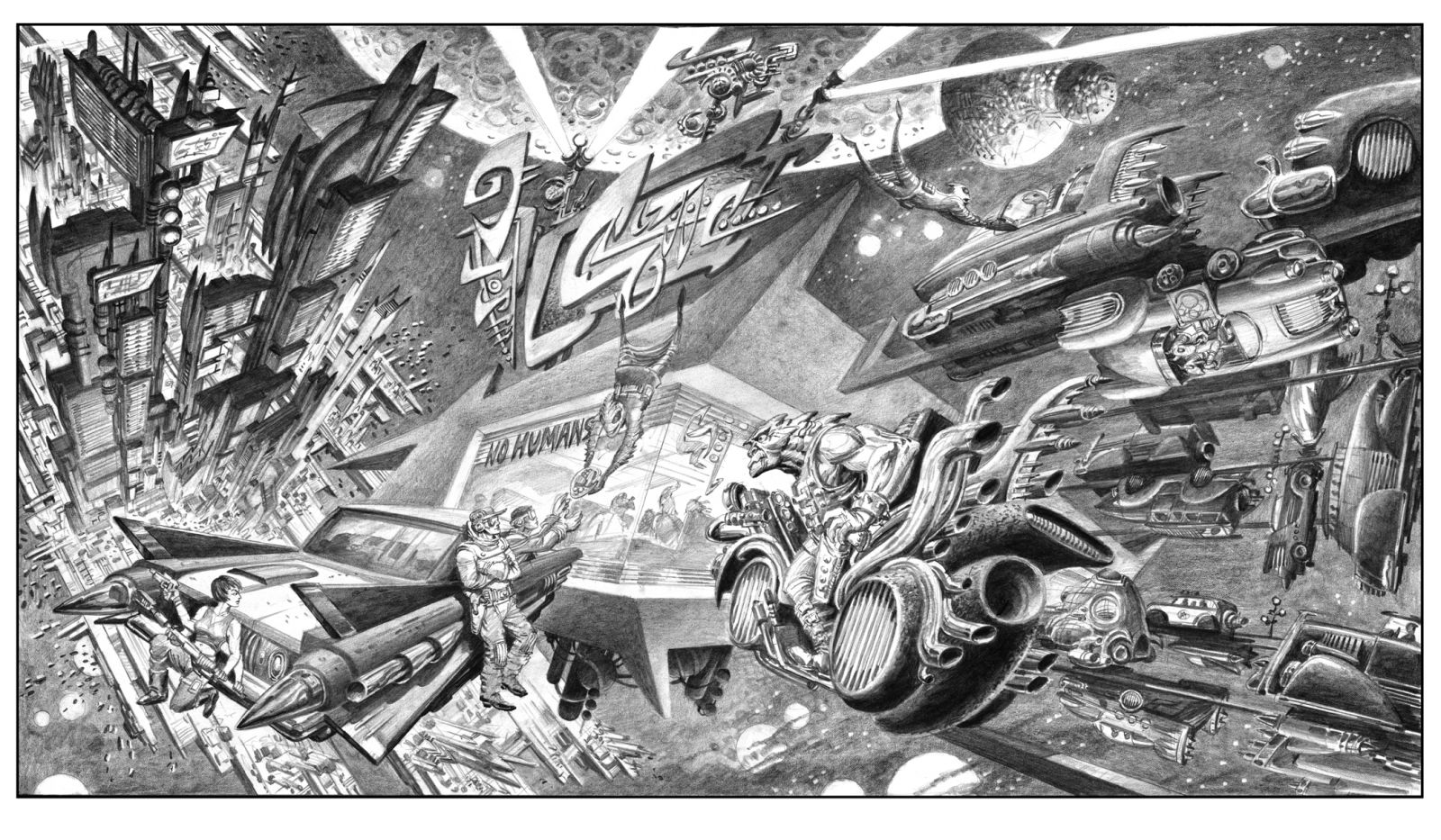 I’m really excited to bring a set of limited edition prints to the CTN Expo, courtesy of Tina Price.  It’s my personal work, which hasn’t left my studio till now, so it will be something new and different, a real labor of love.  The art is a tribute to a Northwest Landscape style, in the tradition of other regionalist styles, like Southwest Art, or Hudson River Art.

I still work primarily in the Stone Age, using pencil and paper.  I have learned digital skills in Photoshop and I love it, but all my work is first created at the drawing board.  I just can’t seem to abandon the love of the tactile experience of drawing tools and the feel of the lead gliding on the paper.  Most of the work I do these days has to be finished quickly, sometimes more in the sketching realm.  But when I have the chance to spend days on one piece, something magical happens.  I fall into the heart of the piece, into the details, which then circles back to define the larger piece, which circles back into the details.  The image comes to life in an amazing way that is always exhilarating.

Not to say that digital isn’t great. It is. When I do my comic book work, I digitally color the images. The original art is still created on the drawing board as either an inked piece or a pencil piece.  Then it is scanned into Photoshop, and the fun begins.  Up until about five years ago, I was afraid of working in color and deferred that process to others.  But slowly, I got more and more jobs that required me to finish in color and gradually my confidence grew.  Then I had a huge color job to do--250 pages of comic book art--and I had to do it super fast.  I didn’t have time to fret over my insecurities and day after day my confidence grew to the point where I completely embraced color and woke up every day excited to tackle more.  Now I love coloring my work and I can’t wait for the next job. 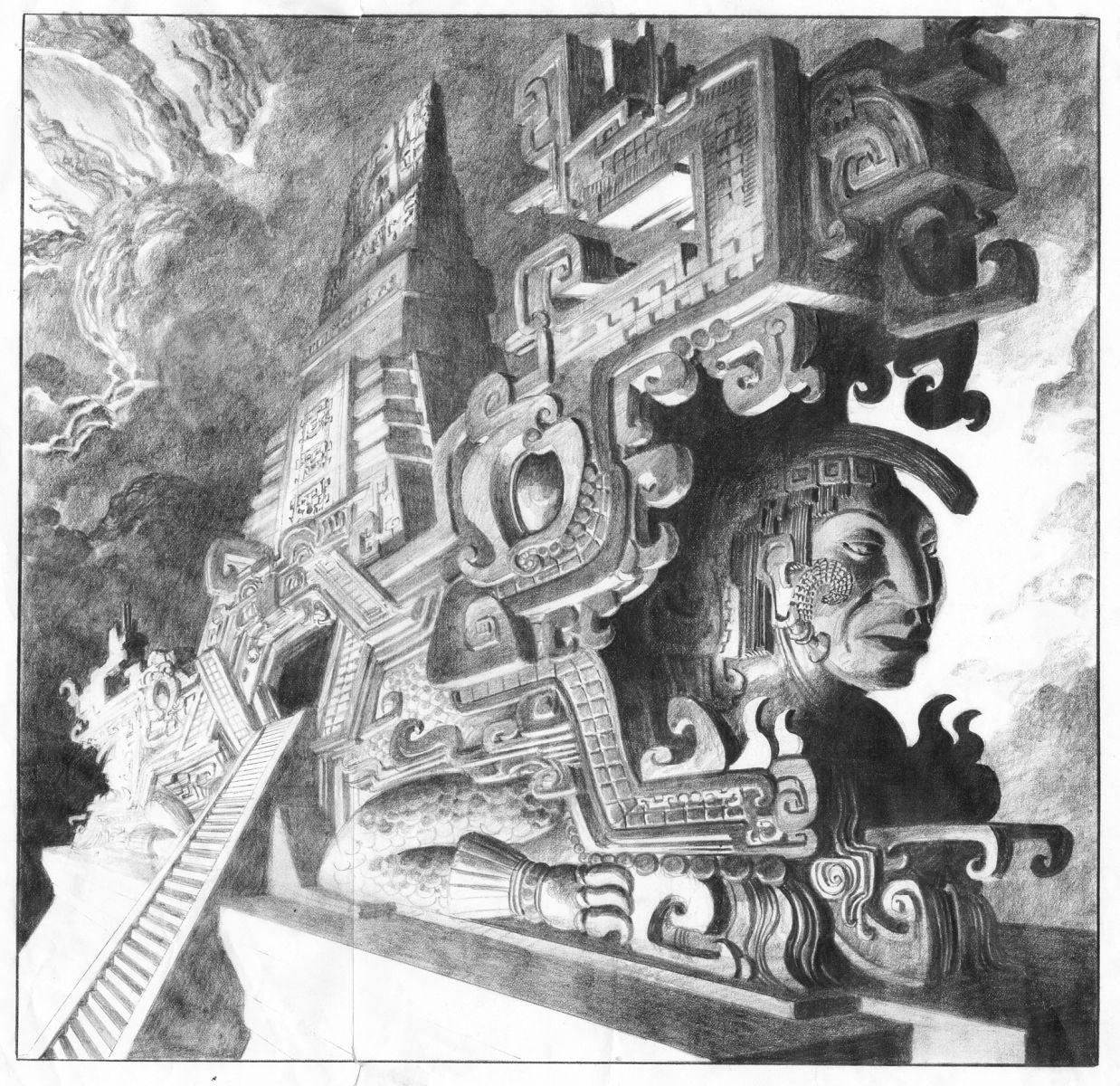